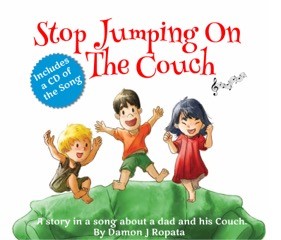 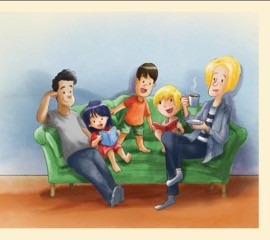 Dear Parents, have you ever had to say:

”Stop Jumping On The Couch”

This book came about from me simply asking the kids to do just that.

I am a musician who loves song writing, and when my children were born I noticed changes around my house as they grew in both size and confidence and began to explore their surroundings. Stretching their imagination to play by using different props around the house, I deemed the couch to be the one item to remain an island of “Time Out”. A safe place for the family.

With my piano in the lounge and the kids ignoring my constant pleas to leave the couch alone, I began singing out :  Please

”Stop Jumping On The Couch”

and from this, a song was born.

The lyrics to the song are the words I would use every day, in an attempt to get the kids to stop. They would build mountains and volcanoes everyday with the cushions and pillows from every room in the house.

After finishing the song and playing it to the children every day, the idea to turn this into a book was suggested. So I began to create a storyboard from the lyrics in the song and drew a mock up that I could use to find an artist willing to bring my vision to life.

I have always encouraged the kids to use their imagination to create and to believe that everything is possible. The making of planets, ships and volcanoes by simply using a piece of furniture became a great way to spend time with the boys, and I have had to cross over many rivers of lava to get to the kitchen.

I hope you enjoy the book and song and that this helps you to get the kids to:

“Stop Jumping On The Couch”.